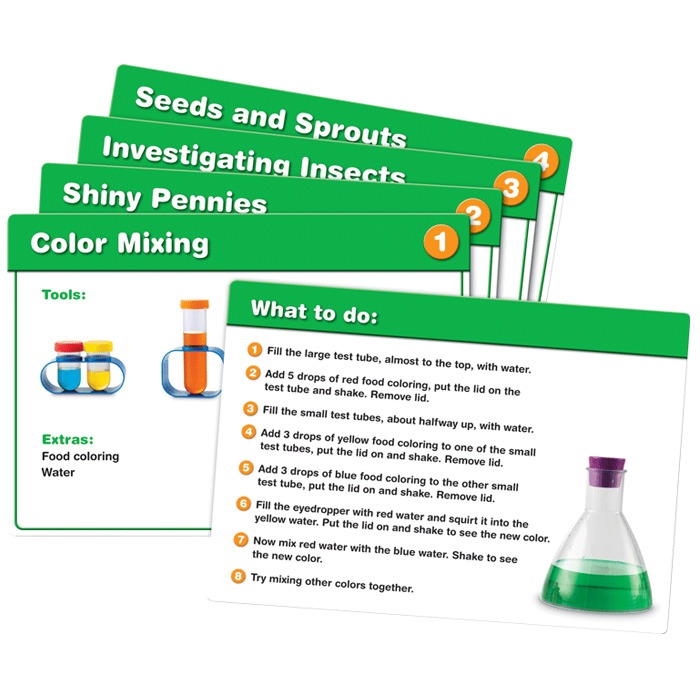 Today we’ve got Caitlin from our Kingston store bringing us some super science experiments!

On Saturday I sported rainbow-streaked hair, a makeshift lab coat, some funky goggles and became Chemical Caitlin – the eccentric scientist and genius in all things sticky and sloppy! My mission? To show the children of Kingston some super-cool science experiments from the child-friendly, no-PhD-required Primary Science Lab set from Learning Resources.

We set up my little experiment table at the front of the shop, catching the attention of any aspiring scientists that toddled by. The impressive display included the Tornado Alley from Kandy Toys and five of the ten experiments that are included in the Primary Science Lab Set:

– Colour Changing Celery (I don’t care what colour it is, Mum, I’m still not eating it!)

– What’s That Smell? (Or, “You’d Be Surprised How Many Children Recognise The Smell of Coffee”)

Taking a backseat were Shiny Pennies, Mixing Impossible and Colour Changing Celery. For Shiny Pennies, we took an old and tarnished one-pence coin and put it into lemon juice. The lemon juice, being an acid, stripped away the dirt from the coin and left it looking new and shiny.

We tried out Mixing Impossible both in a large drinks bottle, and also in one of the little chunky test tubes that comes with the Lab Set. The oil and water will not mix, and the oil remains floating on top of the water. If the container is shaken vigorously, the liquids will emulsify, appearing to mix – but will soon separate again. We tested out a variation of this experiment and added salt to create a 60s-style lava lamp – groovy!

Colour Changing Celery unfortunately let us down, as we hadn’t realised how long was required for the plant to take up the colourful water- although we did manage to cut the celery open and see the colour starting to move up inside the “veins” of the plant, so it wasn’t all… in vein.

The stars of the show, however, were What’s That Smell? and Mini Volcano! For What’s That Smell, we placed some tangerine peel, chocolate, peppermint, coffee and cinnamon in individual test tubes wrapped in paper. Our tiny testers then had a whiff to see if they could correctly identify what was inside. Many children were able to recognise the chocolate scent and identify the tangerine peel as some sort of citrus (a number of kids and parents guessed lime). I thought they would struggle to name coffee, but apparently lots of children today know the smell of the magical wake-up potion that Mummy and Daddy drink! There was general difficulty with peppermint- one child interestingly called it “shampoo”. Cinnamon also caused confusion with some children misidentifying it as gingerbread. This experiment was great to get both the children and the parents involved- I would offer the child a sniff, hear their guess, then offer it to the parent to see if they agreed or not- and my miniature aromachologists seemed to enjoy themselves! 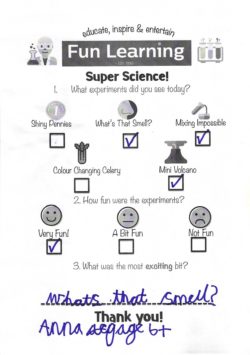 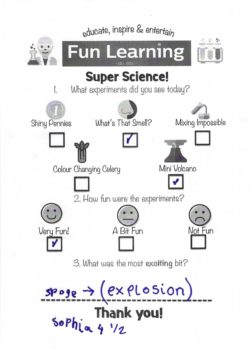 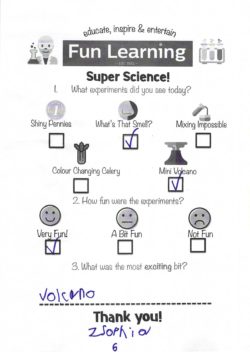 Last, but certainly not least, Mini Volcano. It’s that classic experiment we all remember doing at some point in our youth: making a gleeful mess with vinegar, bicarbonate of soda (“Me and Mummy do baking with that!” said one child), and a bit of red food colouring for dramatic effect. For our volcano we used the kit’s beaker (or Erlenmeyer Flasks, for terminology sticklers), and depending on the age of the child they were either my audience or my assistants joyfully pouring and mixing by themselves. This experiment was overwhelmingly popular- almost every child who filled in a feedback form listed the volcano as the most exciting part of the activity, one child delighted in sticking their fingers in the erupting froth, and my favourite response of the day is the single word “spoge”: a four-and-a-half year old’s valiant and adorable effort to write the word “explosion”.

I am not really a scientist. I’m an English Graduate, for whom emotion often wins over logic. But sharing Learning Resources Primary Science Lab Set with our Tiny Testers of Kingston-Upon-Thames, I tasted a slice of the fun that can be had with science, and hopefully this fun, comprehensive product can be the catalyst (science word!) for a love of science, and maybe even a future in STEM careers, for some of the children who took part in our activity that day!

For more scientific experiments, microscopes and educational fun check out our science category or have a browse through our newest arrivals.

Send a message or give us a call